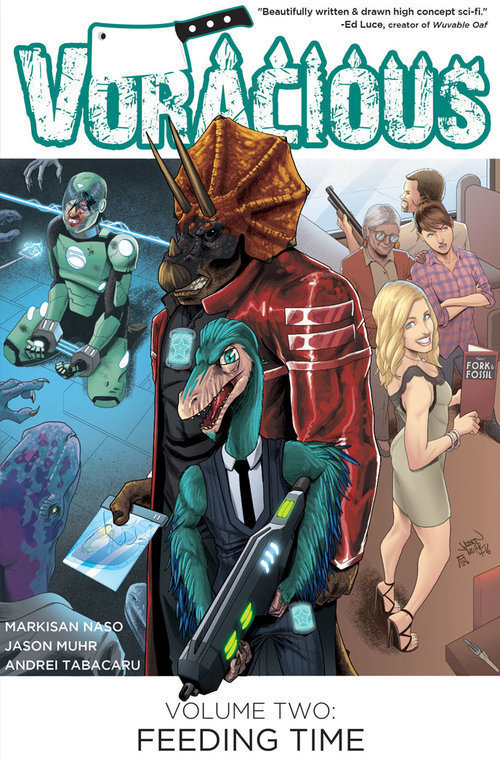 Hunting dinosaurs and secretly serving them at his restaurant, Fork & Fossil, has helped Chef Nate Willner become a big success. But just when he’s starting to make something of his life, he discovers that his hunting trips with Captain Jim are actually taking place in an alternate reality – an Earth where dinosaurs evolve into Saurians, a technologically advanced race that rules the far future! Some of these Saurians have mysteriously started vanishing from Cretaceous City and the local authorities are hell-bent on finding who’s responsible. Nate’s world is about to collide with something much, much bigger than any dinosaur he’s ever roasted.

Collecting VORACIOUS: Feeding Time #1-5, this second volume of the critically acclaimed series serves up a colorful bowl of characters and a platter full of sci-fi adventure, mystery and heart!

10/10 "If I read a better series this year, then I’ll be shocked. Voracious: Feeding Time has set the bar pretty bloody high." -Graphic Policy

U.S. Shipping Only. Ships via MEDIA MAIL. Due to the COVID-19 pandemic, postal services in certain regions are experiencing unpredictable delays. I also ship from Hawaii, so your order may take a few weeks to be delivered. Thank you for being patient.

Save this product for later